After almost 3 weeks of terrible back ache, matters finally are getting a bit better.

I saw a lot of issues coming along in the comments. I realized that we might be able to formulate a lot of answers to some longstanding questions. Like:

Robert gathered a whole lot of information. As far as I can see, all the answers to the above questions came along. I couldn't formulate it because I could only lie on by back in one position, the past weeks. Now I physically make a bit progress, lately, I will give it a try.
Posted by Temposchlucker at Friday, January 08, 2021 54 comments:

While I was busy to build abstract ideas from concrete positions, some familiar framework emerged. I was doing the same thing as I was doing in 2017. I was erecting my tree of scenarios again.

Do you recognize the box from the previous posts?

Back then, it didn't work out as expected. But now we have discovered the mechanism behind transfer, it is clear that I used the tree of scenarios the wrong way around.

The right way is:

We don't have to teach system 1 how to come up with ideas from a coatrack. It already knows how to do that. We just need to use system 2 to build a proper one.

The conclusion of our former discussion can be summarized as: in order to transfer knowledge learned from one position to another, system 1 (unconscious) must be fed by analogies with a higher level of abstraction. If you think deeply about it, it makes perfectly sense. But at first glance, is sounds like gibberish. How to make it more concrete? (which sounds as less abstract 😁 ). In other words, what the heck are we talking about??

I have encountered this problem 9 times over the years. As you can clearly see, I have learned nothing from it. (tijd = solving time) 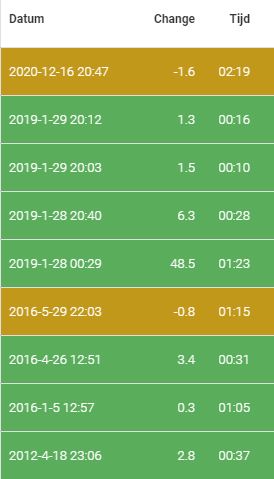 So, what feedback must we abstract from this position that is usable for other analog positions as well? What is the main idea behind this position?
The black king is out in the open. The main question is: how can we prevent him from skedaddling into obscurity again?
This abstraction can be used in many, many positions.
For this particular position, the way to solution can be concretized as: how to prevent Kg8?
Posted by Temposchlucker at Wednesday, December 16, 2020 6 comments:

Something Robert said somewhere struck a chord with me. He talked about analogy being the primary language of system 1 (unconscious thinking). Since then I wondered how we could integrate analogies in our training method.

What do I want to reach with my new opening repertoire? In the first place, I want a direction to my actions.

For years, I played my openings by means of chance. Since I can learn pretty quick a bunch of variations, I usually can replace a repertoire within a few weeks. I have done this so many times in the past. But the problem with variations is, that they will hit sooner or later the end of the variation. Black is slightly better. Now what? If you can't answer that question, you might as well rephrase the question with: So what?

By choosing a direction for my actions, I create the possibility for feedback. If you don't know what you want to achieve, you have no way to judge whether you achieved it. In fact, the direction you choose initially, doesn't matter all that much. Since feedback should guarantee that you correct your direction along the way. Hence I will not hesitate to stretch matters to the brink of absurdity. The fastest way to end up in the middle is to test the extremes first.

An important reason for choosing a direction, is that it saves time. Big time. Without direction, you can think about a move until the cows come home. If you have no goal, you cannot know if you have reached it. For me that used to mean that I always ended up in time trouble. Now I chase a goal, I play much faster.

There are many ways to play an opening. There is no absolute right way. Hence I will not try to find the best moves. Good enough moves will do. If you stick out your c5 pawn early in the game as black, you might well end up with a majority in the center, once your c pawn is traded for his d pawn. From that moment on, you created an extra possibility: you can trade pieces and enter an endgame. Trying to convert the central pawn majority into a win.

Nimzowitsch' system tells us how to treat a center:

That's what I want to achieve with the Sniper. And the HAD. I'm not interested in variations, but in ways to achieve this. Since I don't want to do things half-heartedly, I'm going to play the sniper with white as well.
Posted by Temposchlucker at Sunday, December 06, 2020 5 comments:

Robert signalled that it is time to talk about the sniper. What's the idea behind the opening?

The sniper in the move order as I want to play it, starts with the moves 1. ... c5 2. ... g6 3. ... Bg7. It's a hyper modern opening, and the idea behind that type of opening is commonly known as "give white the pawn center and invite him to overextend, then attack the center from the flanks".

The sniper is coined and elaborated by FM Charlie Storey. He made a DVD about it. It was picked up by GM Ron Henley too, who made a series of videos about it.

So he "invented" the Sniper. General ideas:

Storey doesn't work out too many variations, but he provides ideas. He provides a scaffolding for your opening.
The evaluation by Stockfish is often misleading due to the dilution principle. He noticed the following:
Say white evaluates to +0.68. Then you let the engine play the best moves for both sides. And after 10 moves or so, the engine evaluates the position as -0.58.
To play the sniper, you need a certain mentality (the same with the HAD). It is not everybody's taste.

I cannot get around it. We must talk about the double whammy move. After a tactical streak of 150 days training in a row, some characteristics started to jump out on me. One such  characteristic is the omnipresence of the double whammy move. We have talked a lot about duplo attacks in the past. Like the pin, the skewer, the double attack and the discovered attack. All these attacks can be reckoned as double whammy moves. They strike at two targets at the same time. But looking at tactical problem after problem, I noticed that there was very often a tempo battle going on. As FM Charley Story uses to say, a tempo can win a game. Just one tempo is sometimes enough. And there are a whole lot of moves that cannot be characterized as a tactical theme. These moves do not only what they do, but besides that they maintain the pressure. I talked about them in the past as moves with an additional punch.