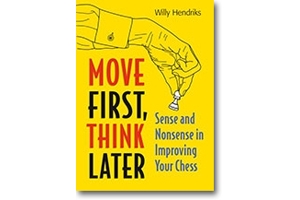 .
.
.
.
I just finished the book "Move first, think later" from IM Willy Hendriks (hattip to Phaedrus!).
Willy Hendriks is a dutch IM who writes very funny and in an easy to read style. The title already suggests that he is not afraid to challenge the mainstream consensus with regard to chess improvement. He criticizes chess authors and trainers who bury their readers/pupils in paternalistic advice which can't withstand a serious scrutiny by common sense.

He compares the current methods with the latest scientific insights and his own observations as chess trainer. An important observation is that the role of trial & error is paramount. Since that is simply how the mind works. He actually reverses the order how to approach a position. The first step is to investigate the position by trial and error. That is is done by letting the mind generate moves. The second step is to base a plan on the findings of the first step. The third step is to judge the found plans. That is the other way around in comparison to mainstream advice, where you first make a list of the characteristics of the position and base your plan on that. Moves rule!

IM Willy Hendriks is obviously from the school of IM James Watson, which says that every rule is overruled by factual calculation. Since that is the case, why bother about rules and generalizations?

Further he talks about chance in chess, the latest cognitive findings, the importance of the unconscious versus the deceived conscious, the use of chess computers, the chess nurture assumption, the attitude problem of chess trainers and authors and deliberate practice (he will make a few enemies for life, I'm sure).

Hendriks sees no role for verbal activities of the mind during a chessgame. I can agree with that, since if the chess module of the mind needs words, you will end up in time trouble. Yet I see two places where language plays a role. The first is in the study room. You cannot learn on autopilot. The second stemms from my own experience too: my visualization is much stronger when it is guided by short narratives that describe what the moves actual do. In an ideal world that might be taken care of by ideas without words which popup automaticly from the chess module, but by now I use words to make it happen. Besides this, there is a lot of resemblance between the opinions in the book and the ideas ventilated on this blog.

In short: buy the book!
Posted by Temposchlucker at Tuesday, August 14, 2012