Today I had to solve a problem about which I have written a post on August 27. I failed miserably. I was rather disappointed. A position I have studied for hours on end, had nothing tangible left in system 1.

But Robert cheered me up with his problem in the comment of the previous post, which I could solve without any system 2 deliberations. I considered my mate study to be completed, so the method is right for mates already, but for the other tactical elements it is not completed yet.

What happened on August 27 ? Apparently, I have broken down the position into edible chunks with the aid of system 2, but I haven't eaten the chunks yet. So system 1 knows nothing about it.

That is why I highly recommend to make use of a database with positions, and use the same positions over and over again. First you must process it with system 2 to make it edible, then you must eat it.

Which helps us with a new definition: you are ready when you solve the position without any activity of system 2.

Posted by Temposchlucker at Saturday, September 24, 2022 No comments:

Roles are not geometrical patterns. It are abstract definitions of tactical elements. A role is often piece independent, although often different pieces give different quirks to the role. Often the role is rather independent of the geometry. There are a huge amount of places where the pieces can be, and still perform the same role.

Roles are closely related to scenarios. A certain set of roles has its own set of standard scenarios. The specific position determines which scenarios from the set are suited and which are not. Have a look at the following position.

Which tactical objects can we identify?

The roles:
Imagine how broad the role of target is. It can be anywhere on the board. It can be any piece.
Imagine how mary types of pinned pieces there are.
Imagine how many ways there are to defend a target.
The scenarios:
What are the possibilities to take advantage of a pinned piece?
What are the ways to eliminate a defender?
Recognize the killbox around the white King. Imagine how many ways there are to build the walls of the killbox.
Bg5+ squeezes the white King onto its target square h5. On h5 the King is stepped into a discovered attack.

The black bishop interferes with the defense of Ne4 by Qe2 with check.

Above, the most important roles and their matching scenarios are described. Somehow we must learn to recognize the roles and the scenarios in this position. Like you can recognize a rabbit in a cloud.

The power of the Fusiform Fase Area (FFA) is its ability to see the analogy between objects. 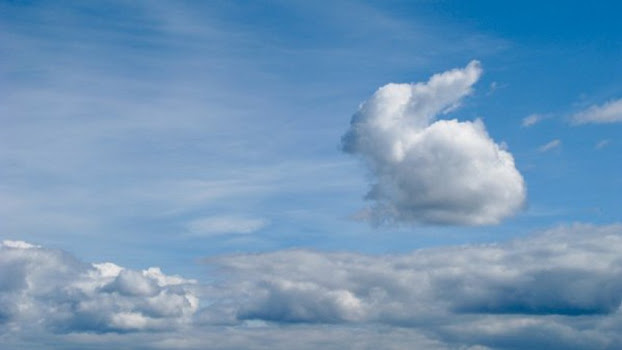 What does this mean for our attempt to gain tactical prowess?

There are about 50 tactical objects, which I mention here  We need to recognize all these objects under all circumstances. Usually, we recognize a pinned piece when we see one. And usually we recognize a double attack or a discovered attack when we see one. When you have seen one Anastasia's mate, you have seen them all. But it is not always clear which piece is a target and which piece is a defender. In order to recognize a defender, we must make an object of the role of a piece. The same is true for an overloaded piece. An overloaded piece can defend a piece, or a square, or a rank, or a combination of both. The piece itself can be a bishop, a knight, a king or any other piece. It is the role we need to learn to recognize. Under any circumstance.

Just 50 tactical objects. It can't be that hard, can it?

Posted by Temposchlucker at Saturday, September 24, 2022 No comments:

System1, are you awake?

Somehow the communication with system 1 seems to be a bit one dimensional.

Status of the LoA

I'm not so happy with the term PoP (point of pressure) since it describes two things at the same time. For reasons of clarity that is not very expedient. First there is the role of pivot point in the line of attack. The line of attack changes from direction towards the target. Second there is the state of the square. Do we have the upperhand or not. Point of pressure indicates that we have not the upperhand on the pivot square YET, but we might get it in the near future.

I like to separate these two elements.
Besides that, I like two talk about the status definition. When we talk about pieces, we talk about B.A.D. (Barely Adequate Defended) pieces. This term is coined by Dan Heisman, if I'm not mistaken. When we talk about pieces, we must not only see their status as being B.A.D. (Barely Adequate Defended), but as being en prise as well, and we must see pieces that are not under attack and not defended LPDO (Loose Pieces Drop Off). So when the status of a piece is:
we have the upperhand or we are close to it. I like to call all these pieces bad, for reasons of simplicity. You can check the state of the pieces by just SEEing them.
The same can be said for pivotal squares where we are close to having the upperhand. These are bad squares. It doesn't even contradict the usual explanation of bad squares: the squares in front of a pawn where your pieces can't be chased away by an adjacent pawn.
This way we can limit the vultures eye to SEEing:
This simplifies matters. All this can be SEEN.
If a LoA is not free AND/OR a pivot point is bad AND/OR a target is bad, you need preliminary moves to change their status.
For reason of pruning I like to postulate the following ideas:
Maybe this is not absolutely true. But for practical use I'm going to apply it to my games.
After SEEing the lines of attack, the state of the pivotal points and the targets, the next step is to SEE the preliminary moves. Preliminary moves are tempo moves that are designed to:
Let's see if we can group some preliminary moves together
Line of attack
Entering the LoA:
Freeing the LoA:
Getting the upperhand on the pivotal square:
End of the LoA:
Eliminate a defender
Adding an attacker
loading a battery with tempo
Summarizing:
An example:
3rkn1R/pp2bp2/8/q2N1B2/3P4/PQ6/1P3P2/1K6 w - - 1 31
Let's examine the first line of attack: Nd5-c7-e8
The pivot square c7 is defended by the black queen, so the square is bad.
Let's have a look at the second line of attack: Qb3-b5-d8. The pivot square b5 is protected by the black queen.
The pivot square b5 is guarded by the black queen. The black queen has to guard two pivot points: c7 and b5. Both lead to mate. So effectively, the black queen is overloaded. b5 and c7 are not in contact. So when the black queen takes on one square, it must give up the protection of the other square. What move is best, Qb5+ or Nc7+?
If the black queen takes on c7, it is still in contact with the LoA b3-b5-e8. While when the black queen takes on b5, it is no longer in contact with the LoA d5-c7-e8
The other pieces which might have an influence on the line of attack b3-b5-e8 are the black knight (pinned), the black rook (over powered) and the black pawn b7 (over powered).
An awful lot of words. But easy to SEE.
Posted by Temposchlucker at Wednesday, September 14, 2022 4 comments:

If we can learn something about PoPLoAFun, it will be helpful by all our moves. So let us continue the investigation.

Points of pressure are the squares where lines of attack change from direction. So PoP might not even be the right name for those squares. What we do know is that we must have the upper hand on those squares, otherwise our attacker cannot make use of it.

Lines of attack have their own signature, depending on the nature of the attacker. Lines for the rook, diagonals for the bishop and hops for the knight.

Which defines our area of investigation:
Today I like to talk about the status examination of the target.
3r2k1/p1qr1pp1/2p1p3/2P2n2/P2bB1Q1/3R2P1/1B3P1P/3R2K1 w - - 0 1
Let's have a look at the lines of attack.
What jumps into the eye is the pressure against g7. Yet these lines of attack play no role in this combination. The reason is that g7 is not B.A.D. (Barely Adequate Defended). In order to have an advantage against g7, we need to get rid of both Bd4 and Nf5, while maintaining the two attackers Bb2 and Qg4. That is a bit too much.
Here we arrived at the status examination of the targets:
Bd4 is attacked 3 times and defended 3 times.
Rd7 is attacked  2 times and defended 2 times.
The first question that arises is:
The first idea that comes up is 1. Bxf5. This changes the balance for Bd4 as follows:
But Bd4 isn't pinned because although Rd7 might be BAD, it is not insufficiënt defended yet. So a simple 1. ... Bxb2 solves blacks problem.
What about Rd7:
The answer is: yes we can. By 1. Qf4 we threaten to exchange a defender of Rd7.
There are two natural replies:
If 1. ... Bxb2 then 2. Qxc7 then a Röntgen attack against Rd8 reveals itself. As Robert said so clear: these motifs are descriptive, not prescriptive.
If 1. ... Qxf4 2.gxf4 one defender of Rd7 is eliminated, so all of a sudden the bishop on Bd4 becomes pinned. Thus buying us time to eliminate a defender of d4 by Bxf5.
I don't want to bore your pants off by working out all details. I want to find out what can be revealed by SEEing. I find the following. What can be SEEN:
The three BAD pieces should trigger an investigation of their defenders immediately. This investigation should reveal the immanent pin and skewer, which need not to be seen beforehand.
Summarizing:
Stockfish SEES the win only after 14 plies. So don't worry. Learn to SEE the basics first.
Posted by Temposchlucker at Sunday, September 11, 2022 5 comments:

The one Anastasia's mate is not the other

And the difference is made by the lines of attack. When it comes to SEEing, I cannot stress enough the importance of PoPLoAFun. It al starts with a clear picture of the LoA's (lines of attack). Let's get concrete.

Let's have a look at the lines of attack and the points of pressure.

A LoA is the line of attack between an attacker and a target. The attacker Rd1 attacks the black King and Queen via the PoP (point of pressure) d8. It is a double attack. This is for system 1 the stuff to SEE. It sounds complicated verbally (system 2) but in the realm of SEEing (system 1) it is ultra simple.

Simple to SEE. The black bishops blocks the f-file

The LoA's of the white Queen:
PoP: e6
All simple to SEE.
The PoP's of the Knight:
So the black King is in danger of een Anastasia's mate.
The black Queen is overloaded due to her FUNction to guard both the points of pressure e6 and d8. e6 and d8 are not in contact. Which means that when the black Queen takes on d8, it no longer guards e6 and vice versa. Verbally complex, but easy to SEE.
The black Bishop is overloaded too (FUNction). He must guard the points of pressure d8 and f8. Easy to SEE.
All pieces that effect no LoA are indifferent to the combination and can be ignored:
This prunes the tree of analysis drastically. Even the fact that the white Queen and Ng5 are en prise or B.A.D. can be ignored.
I hope that I have made clear that the SEEing of PoPLoAFun is essential for every combination. It prunes the tree of analysis and is the way to make the position simple.