After lengthy discussions with mr. Z I decided to see if I could bring some organization in the list of concepts I created while describing the solution of hundred very complex tactical problems. These are the sections which emerged after sorting:

I didn't see that one coming!
Much to my surprise I'm back at CCT again. 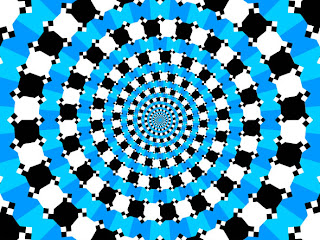 .
.
.
I often said that this blog is going around in circles and talks about the same topics everytime.
I prefer to look at it as spirals, though. Everytime I reach the same point, but with additional knowledge. The facts that the same topics keep reoccuring time and again after carefull reasoning, means that the solution must lie within those topics. It is like a chess combination. You know the moves, but you have to find out the order. All this is thus very much unlike this picture above which is NOT A SPIRAL but consists of circles instead.

Memory lane.
The last time we talked about CCT was here. Why did I leave the concept in the first place? I made a dissection of CCT in CCT and visualization here and I went on looking for visualization. I found that visualization is greatly helped by guidance by means of concepts. And now those concepts show that they are organized according to CCT!
Remember that we are speaking here in the realm of tactics, which is the ultimate place where visualization will give you an edge.

Posted by Temposchlucker at Sunday, November 13, 2011